As briefly discussed in the President’s Letter, TSBA accepted the Friends of Fisheries award at the Society’s awards dinner on March 15th at Montgomery Bell State Park.  Following is the nomination that was written by Paul Shaw (TWRA) and Michael Jones (ORNL) and submitted to the Society.

“Oak Ridge National Laboratory (ORNL) annually collects striped bass from Watts Bar and Melton Hill reservoirs for PCB analysis. The Melton Hill fish, being upstream of any discharges from U.S. DOE operations in Oak Ridge, Tennessee, provide reference tissue which is relatively free of PCB contamination. A fish consumption advisory is in effect on Watts Bar for striped bass because of elevated PCB levels in those fish.

Over time, it has become increasingly difficult for ORNL researchers to obtain suitable-size reference fish from Melton Hill. Striped bass have not been stocked in this reservoir for many years, and remaining Melton Hill stripers have grown exceptionally large. This reservoir has produced several fish in excess of 60 lbs., and at one time held the world angling record for landlocked stripers.

The ORNL researchers, headed up by Dr. Teresa Mathews, study the effects of bioaccumulation of heavy metals and other contaminants in numerous fish species and much of their data are used to help establish fish consumption advisories. By 2012, it had become apparent that Melton Hill stripers were simply too large to serve as suitable reference fish.

ORNL researchers contacted TWRA for help in locating striped bass from Norris Reservoir with smaller body mass than those generally found in Melton Hill (and from locations free of PCB contaminants). During the collection period, striped bass on Norris are usually too deep to collect with electrofishing gear, and gill netting would produce undesired bycatch mortality. Another technique was needed.  Ezell Cox, a member of the Tennessee Striped Bass Association (TSBA), was contacted. Almost immediately, Ezell rounded up a half-dozen conservation-minded club members who volunteered to take the ORNL personnel and some TWRA observers fishing on Norris. Because of stringent chain-of-custody and scientific collection requirements, ORNL employees accompanied each TSBA boat.  The outing of the winter of 2012/2013 was the first in what has become an annual event.

The TSBA volunteers are extremely efficient at locating and catching striped bass that meet ORNL’s needs. The rod-and-reel collection method eliminated bycatch mortality; stripers of undesired size and non-target species are released. Instead of days spent electrofishing, the TSBA volunteers’ expertise has reduced the process to hours. A remarkable spirit of cooperation has developed between TWRA, TSBA, and ORNL, with all personnel and volunteers now looking forward to this annual event. Without question, each organization has benefitted from the knowledge and expertise gained from the other cooperators, making this collaboration a resounding success.

The TSBA members have been participating in this annual project at personal expense, donating equipment, fuel, oil, and time. During some years, boats have traveled 70 miles to complete the requisite sampling. Despite the expense, time requirement, and often inclement weather, the volunteers have maintained an enthusiastic attitude and willingness to participate in this ongoing project. The TSBA hopefully recognizes the importance of their contribution and the role they now play as ambassadors in fisheries conservation and stewards of human health as it relates to fish consumption advisories. We can think of no one more deserving of the Friends of Fisheries award than the outstanding membership of the Tennessee Striped Bass Association.”

The relationship that exists between TWRA and TSBA is very good we should all be proud of this.  It is the result of hard work by many of our members over the years and needs to be continued in the future.  Clearly, we wouldn’t have our sport without TWRA.  Following are a few pictures of our collection efforts and a photo of the award. 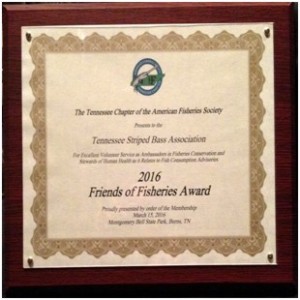 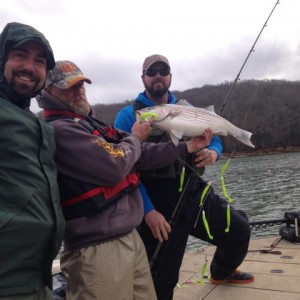 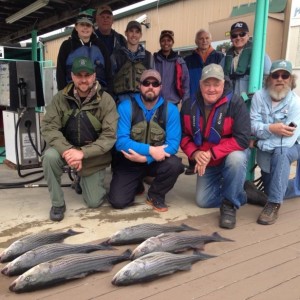 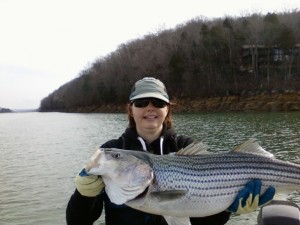 Allison with a nice fish.